Q-Bert Would Have Been a Terrible Training Coach

Yeah, I know - I'm dating myself.  Well, that and I'm also making a rather tenuous connection between an '80s video game and the world of health and fitness (which is, in and of itself somewhat ironic given the current state of our society's youth as a result of video games - but I digress)... 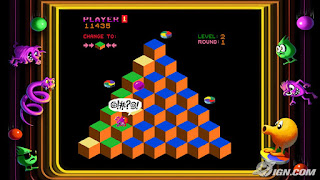 The somewhat obscure metaphor I'm trying to draw is that your training program should resemble  s a staircase - a linear path towards a specific goal.  This isn't to say that there may not be times where you have to change staircases... nor is it suggesting that there isn't any opportunity for a fun deviation.  However - if you are constantly changing direction and bounding all over the place without a specific target... you wind up never getting anywhere.

For those who don't remember (or know it in the first place), Q-Bert lived on a pyramid of steps, and all he did was bounce around - trying to make sure he landed on every step once, and avoiding the death-balls that were raining down on him.  And this, quite honestly, is what I see a lot of people doing with their training... they randomly go to the gym, do a random selection of exercises, maybe jump in on a bootcamp, occasionally a spin class, go for a run, try out Zumba, take Greco Roman wrestling... and all of it to avoid the impact of poor lifestyle choices.  But it's not actually going anywhere.

The point is, you can (and should) try all of these things out if you want - bottom line is they're all fun, they're all active and all of them can be a part of bigger picture.  But you still need to have a goal - a direction - something that ties all of them together.  If you don't do this, then it's like monkeys and typewriters - sure, at some point banging the keys will spell a word, but you're never going to get a story out of it...


So find something that you really enjoy - or really challenges you - and publicly announce what you're training for.  Maybe you want to run a half marathon, or fit into a certain tuxedo for a wedding... maybe you want to be better in rec hockey, or beat your friend in a dance competition... whatever the case may be, commit to it, find a program that helps you get there - and start climbing.

Oh, and as a side note - yes, I sucked at Q-Bert.  Probably why I still resent him and what he stands for.