We've all known someone - usually in high school, actually - who thought they were a kung fu warrior.  You know him - he's watched all the movies, read all the books - and with what he sees, he likes to try it out for a good 15 minutes a day, learning how to do the real cool shit (like a spin kick to the head).  The thing is (assuming this guy didn't get pummeled soundly first), these guys rarely took any actual classes.

Now, there is an exception to every rule - frankly, I ran the risk of becoming one of these guys myself, as I started watching the ninja movies at 11 years old, and had a karate book that had a bunch of drills to work on (of course, I pretty much just did the kicking).  But aside from having the wooden sword hanging on my wall (sigh - yes, it's true) I actually started training at the age of 12, and continued right up until I was about 30.  But during these 18 years, I saw lots of "these guys" coming in... they wanted to learn the ass-blasting roundhouse, but they didn't want to practice the basic patterns.  And when they actually did practice the basic moves, it was half-ass... they'd do the required number of reps but usually by the time they reached halfway they were, at best, mimicking the move (badly) just to "get it done" - so they they could go on to the awesomeness. 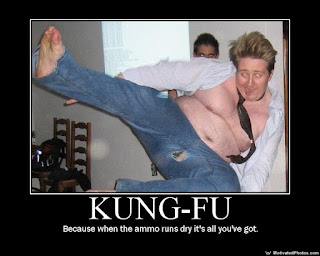 But they never did, because the instructor wouldn't progress them until they mastered the basics.

Strangely enough - the same applies to all other movement-based skills.  Dance, sports... even weight training.  They all have fundamental movements that have to be mastered before you can start doing the advanced things.

So stop it.  Stop rushing.  Stop finishing with terrible form on reps, stop adding more weight, stop trying to skip the hard work.  Otherwise, at some point I can guarantee... you're going to get your ass kicked.
Posted by Guy Demong at 6:31 PM