I love Tuesdays. The word "Tuesday" conjures up images of a cozy fireplace, me with a warm cup of coffee (or two), sitting on the couch in my pajamas, with a plate of fluffy, homemade pancakes drenched in maple syrup, and catching up on the latest episode of "The Voice". I "heart" Tuesdays. If you haven't guessed it already, I have Tuesdays off (it might be awkward if I tried to do this at work). 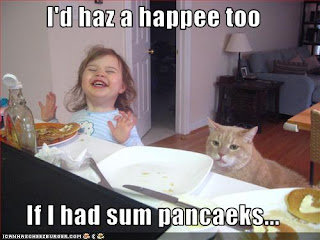 But lately my Tuesday morning ritual has changed, and it's taken some getting used to. Yes, I still catch up on the latest episode of "The Voice" in my pajamas on the couch, in front of the fire, with a "cup or two of Joe" but my fluffy pancakes have become a thing of the past (for the time being).

You see I'm using myself as an experiment and trying a nutritional protocol called Intermittent Fasting - and while this blog isn't about said protocol it's relevant because as part of this experiment I am not eating my first meal until later in the day. Which explains why I'm saying "sayonara" to my fluffy, syrup drenched, Tuesday morning companions.

Where is this going besides sending everybody to Dennys for their all-day breakfast special? The realization that I'd trained myself like Pavlov's dogs. For me, pancakes on Tuesdays had become synonymous with rest, relaxation and everything else wonderful about a mid-week weekend.

Relevance? Wait for it.

I was training a client who was telling me that both her and her husband had decided to give up booze for the holidays in an effort to "maintain, not gain" this season, but they were struggling. Why? Not because of the booze but because of what the booze meant; a sigh of relief after a long week. They'd done it too. They were the dogs and booze was their bell. 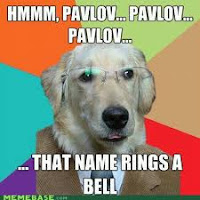 If you haven't had the "booze, bell, pancake, dog epiphany" yet let me help you out - sometimes it's not about the food. It's about going James Bond on food's ass to figure out why you want what you want, when you do.

Email ThisBlogThis!Share to TwitterShare to FacebookShare to Pinterest
Labels: Nutrition