"Those Are Some Heavy Balls You're Handling"


Okay - now that I have your attention... let's never call it a "kettleball" again. 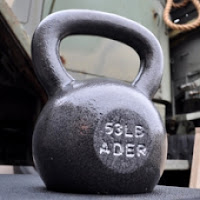 So here's the thing.  I actually remember seeing the Rolling Stone where kettlebells (and Pavel Tsatsouline) were written about, back in 2001.  I actually didn't begin training professionally until February 2002, but fads and trends in the fitness industry were still on my radar.  To be completely honest, I was pretty sure this was simply the "newest" thing to come out, something that was going to be forgotten around the same time as Billy Blanks and Tae Bo.  However, it didn't vanish.  Didn't really take off, but didn't vanish.  Instead, hovering sort of on the outskirts of popular training ideas, achieving a fringe, hard core following over the coming years.

I still didn't pay much attention to them. 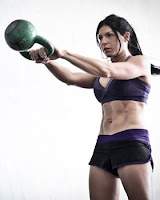 But they didn't go away.  And in the last year or so, I began to take a bit more notice of them, as some of the people whom I hold in very high regard in the industry seemed to be using them more and more frequently - and I felt compelled to look a little more closely.  And as I did, I began to notice something significant about all of the people who used them at a very high level.  Their movements were clean and graceful - almost like a dancer in terms of the control they showed - but incredibly strong as well.  Women holding half of their bodyweight in one arm, overhead, as they did a move called a "Turkish Get Up", men swinging that weight much (and more) around themselves, at all times under control...

So, I started training with them.  But just like the martial arts, I knew that a book or weekend seminar was hardly going to qualify me to use them properly, let alone incorporate them into working with clients - so I sought out a qualified instructor and began to really train with the kettlebell.  And I realized that like the martial arts, it takes diligence, repetition, practice, and failure to properly learn to use these things - but that the physical rewards are exponential.

Now, all of that being said (and probably at the risk of going contrary to what many of my contemporaries might feel), I don't believe that these are an easy piece of equipment to utilize.  Simple, yes, but not easy.  If you want to begin using them in the training, I say "go for it" - but don't just grab one and start swinging.  Find someone who's been trained properly by someone else, and who can pay that movement education forward - rather than risk injury by blindly trying to mimic what you see.  You train with a kettlebell - you don't exercise with it.  If all you want to do is burn calories - go for a hike.  Much safer, and hopefully, you don't need to spend months perfecting the basics.

And for God's sake, do not use a Jillian Michaels or Bob Harper kettlebell DVD as your instruction.