...And Thus, the Pendulum Swings 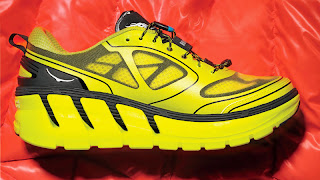 Remember barefoot running?  Yeah, that was pretty cool - but so totally 2013.  Now we have the Hoka - the antithesis of the minimalist movement.  Because apparently, returning to some degree of normalcy in the middle of the road isn't enough - nope, we need to fly 100% in the opposite direction.

In the interest of full disclosure, I will say that I have never run in the Hoka - and, to continue with this disclosure, I will also say that I have absolutely no intention of it.  The Vibram toe shoes were bad enough (never wore those, either, though I do wear the New Balance Minimus while I work and do my resistance training), but this takes it to a whole other level.  I will keep my eye on the research so that I can stay informed (thus far, from what I've read, there hasn't been any studies conducted on oversized soles) but I'll be straight up - if the only way I'm going to be able to run is by wearing a pair of platform shoes that resemble part of a clown costume, then that's probably my body's way of telling me that running isn't my best training option.

Besides - all I have to do is wait 5-10 years and everyone will probably be running barefoot again.

Or maybe on their hands, and bypassing the lower half of the body entirely.