(This is a three part series on getting started with an exercise program.  In Part Two, we'll look at choosing a program - you can read Part One here.) 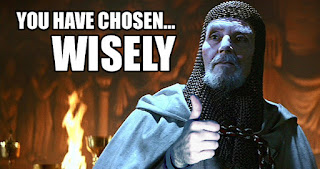 Once you've decided where you're going, next you have to figure out your mode of "transport".  This can have a significant impact on your success, since the most important part of any program is - wait for it - actually doing it.  So consider the following questions your "Gatekeepers" - the checklist you'll apply to your various options to help narrow them down to the perfect fit.  If the program or training method you are considering fails one of the litmus tests below, then you're probably better served looking elsewhere.

Is It Safe?
This should be obvious, but given some of the programs that are out there being utilized, clearly it's another example of "common sense ain't so common".  Maybe it would be easier to think of it less black and white, and more in terms of scale of balance - does the reward outweigh the risk, and is the risk something you are capable of  taking?  For example - if you rely on being physically fit for work, then any program that offers a significant chance of inhibiting this ability through injury is likely not worth the gamble - no matter how great the payoff.

Is it Effective?
This goes to what you've already done in Part One, where you've defined your one or two primary goals.  Assuming it's passed the first Gatekeeper (the risk/reward balance is acceptable), you now have to figure out if the program is efficient in helping you reach your goal.  Given that most of us already have to carve out time to dedicate to our health, we don't want to be putting this commodity towards a wasted effort.  If you want to run faster, you probably shouldn't make the bulk of your training high intensity metabolic work - and if you'd like to lose body fat, then your time is better served in ways other than hours of running on a treadmill.

Is It Fun?
Like the "is it safe" question, maybe this needs to be worded somewhat differently.  After all, there are a lot of training styles that, in themselves, aren't inherently "fun" but that offer an intrinsic satisfaction.  Rather than trying to measure this by whether or not you're smiling the entire time you're doing the chosen activity (which, frankly, would probably be a little creepy anyway), ask yourself : a) if there is a significant element to the training that you enjoy (hitting a new PR in a specific lift, or earning your next belt in a martial art), and b) if you're going to be able to do this for weeks/months/years on end.  Anything that feels too much like a chore - like something you're doing because you "have to" (self-imposed or otherwise) - likely sets you up for failure.

Now, the final step towards success - finding the right guide...