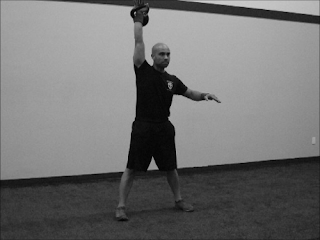 Many of the people who follow my Facebook or Instagram posts are (justifiably) going to be under the impression that I'm a die-hard devotee to the kettlebell. (Anyone following my Twitter, on the other hand, probably just thinks I'm a generally angry person). While the latter is somewhat true - I pretty much just use Twitter to rant - the former is not necessarily accurate. It is not so much that I'm a kettlebell super-fan, as I'm a results super-fan - and there are few tools that I find more broadly applicable yet equally effective than this small, odd-looking cannonball with a handle.

There are a couple of different "styles" of kettlebell, and within those are a number of different schools, interpretations and variations. The two main styles include what's known as "long-cycle" kettlebell, which focuses on developing a form of strength-endurance through movements that are as efficient as possible, and "hardstyle", which focuses on powerful, explosive technique. Which one is better? Neither - it all depends on what outcome you are looking for in your training.

What first drew me to start using the kettlebell in my training, and learning how to do them properly, was when I heard Charlie Weingroff (a well-established physical therapist in the US) speak at the Okanagan Strength and Conditioning Conference back in 2011. Two things he said that resonated: first off, that "pound for pound, you will not find a more effective tool for training loaded movement", and secondly, "anyone can swing a kettlebell - but not everybody knows how to do a kettlebell swing". I came back from that conference and immediately sought out the services of coach, applying the kettlebell to my own training and testing for the StrongFirst™ certification a year later.

The beauty of the kettlebell is it's simplicity. There are, at it's core, essentially 6 basic movements - the swing, the squat, the clean, the press, the Get Up, and in a prime example of coordinated movement, the kettlebell snatch (for a little more detail on the snatch, go here).


Working off of these basic movements, and creating variety through the weight, volume, timing, etc, you can generate results that cover everything from rehabilitative work to strength and conditioning, with only 1 or 2 of these portable little items and your own bodyweight.

Now, that being said - for this to be safe and effective, you really need to learn how to do it properly from a trained and qualified coach. A short-list of some of the various certifications that you should keep an eye out for if your looking for an instructor include the RKC™ (Russian Kettlebell Certification), SFG™ (StrongFirst), and WKC™ (World Kettlebell Club). They may come from different styles, but the certification process for at least these three are rigorous and demanding - a coach that has earned their stripes in one of these has spent a great deal of time learning the methods that they will be passing onto clients and students.

As I said at the start, there are a number limitations to the kettlebell - and despite how this article makes it sound, I actually use a broad variety of tools and methods for training (myself, clients and athletes), depending on the outcome I'm trying to achieve. Not everyone wants to spend the time learning how to use a kettlebell properly - which is fine. We have barbells, sandbags, plyometrics, bodyweight, dumbbells, ViPR, landmines - the list goes on, and in some cases, one of these may be better suited than the kettlebell. But if you're looking for a simple, adaptable, transportable piece of equipment - the "multi-tool" of the health and fitness world - you'll be hard pressed to beat the kettlebell.