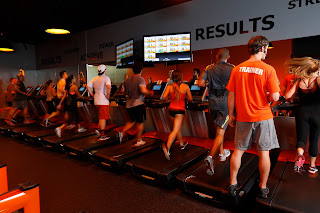 For a number of reasons, Orange Theory has come across my radar with greater frequency over the last few months. Full disclosure - I have never attended a training session at an Orange Theory, so my own opinions have been formed based on (what I consider to be) experience in, both as a participant and as a coach, similar training sessions and protocols.

Now, that being said, today I came across a couple of pieces on my Facebook feed about it. The first was an opinion piece that was written by Kelsey Miller for Refinery 29 (you can see the original article here), and the second was the response to the article by Mark Fisher, of Mark Fisher Fitness (www.markfisherfitness.com) in New York. Now, I've come across a lot of Mark's material before - interviews on podcasts like "The Fitcast" (hosted by Kevin Larabee - a resource I highly recommend), posts he's written on Facebook, and, frankly, the hugely positive reviews I've read by both clients and other fitness professionals I highly respect.

So when I saw he'd posted a response to the article on Facebook, I was immediately interested in hearing his thoughts - and after reading it, decided that he'd basically said what I would have liked to, but probably better. I immediately asked him if he minded me reprinting it here on the blog, and he said "No problem". It means this is a longer post than I normally write, but hey - just keep the tab open and come back to it later. :D

"I have to start this post by first qualifying I am a fitness agnostic; you've never seen someone more committed to "don't make the perfect the enemy of the good" than I am. However, I do want to share some thoughts about this...
I'm the first to admit I don't have it all figured out, but I would just gently suggest there may be a more sophisticated way to do this. I don't think we have to choose between fat loss and good movement (particularly since the former is largely driven by diet). Additionally, if the goal is to balance short term results with longevity, I think there "could" be challenges to the latter with gamifying things like fat loss and heart rate with super driven people who intuitively think more is always better.

Admittedly, it will likely be harder to scale because it will require more coaching, but such is life."
Posted by Guy Demong at 11:59 AM 0 comments

Return to Play from MCL Sprain

I did a little write-up on the process from a first-person perspective. Keep in mind, this is an "n=1" scenario - timelines, results and protocols will differ from person to person, and practitioner to practitioner...

What It's Like to Recover From an MCL Injury

Who Trains Your Trainer? 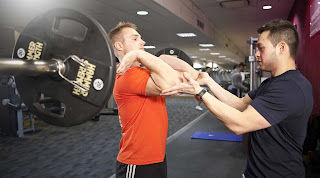 Whether you're looking to hire a trainer/coach for the first time, or you've been with someone for a while, there's one question you should put to them - sooner, rather than later:

Before I go any further, I think it's important to distinguish between "hiring a coach" and "trading sessions" - the latter being something that's pretty common in our industry. Trading sessions are still a valuable resource, because they allow for a little bit of extra energy to be injected into a session, gives trainers an opportunity to see what else is out there, and allows them to pick up a new trick or two. However, when I say that trainers need a coach, that is not the scenario I'm talking about. What I mean is that they should hire (in other words - pay) someone to design a program and coach them - teaching them new skills, as well as helping them to practice and refine their current ones.

You see, a few years ago Sasha and I had decided to take part in a two week business-development program (fitness specific) and one of the first questions from the teacher was "Which of you has a trainer?" - to which the reply was generally "Not me". He then asked why, and the usual reasons were given - "not enough time", "not enough money", "I can do it myself"... but he silenced all of us when he followed up with "If you don't see the value in the investment, how can you ask somebody else to invest in the exact same thing with your business?"

Further to this, I also believe it says something about the coach in general.  It suggests that they are open to learning, that they have the humility to recognize they still have things to learn, and that they truly believe in what they're asking you to buy into. It also means that they understand things from a student's point of view - the challenges and obstacles that are faced, ways to overcome them - all of which are experiences that will be invaluable to you as their client/athlete/student.

So the next time you see your trainer, or are shopping around for one, be sure to ask them who is their coach... and if they say don't have one, put them on the spot and ask them why.